I did something new and exciting … and a little scary!

You can read more of the story below, but right now I just can’t wait to tell you my exciting news!

For Lung Cancer Awareness Month, I made a short video called, “What can Jelly Beans Teach us about Lung Cancer? You might be Surprised!”

I’m proud of this little video! It’s my first attempt and it’s rather rough, but it’s real and from the heart, and I’m honoured to share it with you!

This whole adventure started back in October when I chose to have a week of saying yes! I decided I would stretch beyond my comfort zone and do things that frightened me!

The next day, the phone rang and I was asked to speak at a fundraiser for Lung Cancer Canada. I said a fairly quick yes, and then started thinking about it!

The more I thought about it, the more nervous I got!

The fundraiser would be in a restaurant, but there wasn’t going to be a microphone, or even a section of the evening when I would give a speech. Giving a speech like that makes me nervous, but I’m getting used to that kind of nervous.

No, this time I was expected to initiate conversations with a bunch of strangers and somehow find a “natural” way to tell them things about lung cancer. That is scary for me!

I couldn’t imagine how to make this happen. I mean, I could easily picture far too many awkward ways of doing it, but there had to be a better way! What would help me feel more comfortable starting up conversations? How could I teach a bunch of strangers about grim lung cancer statistics at a restaurant?

So I came up with an idea! I got a few items together and worked out a little interactive spiel, and then I went to the fundraiser. 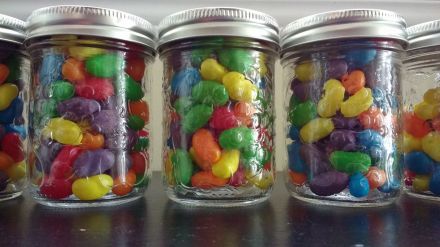 I did not expect it to turn out so well! The woman organizing the fundraiser was so lovely, and the family and friends who had shown up to support her were kind and encouraging. Most of them wanted to hear what I had to say, and quite a few were very keen. I gave out some of the Lung Cancer Hope Rocks too! #LCRocks 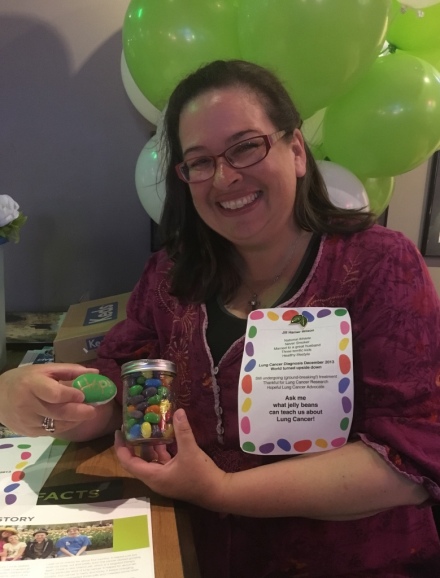 What was so powerful for me, though, was to watch the looks in their eyes as the penny dropped. Wow! These simple jelly beans were helping the message get through! When those moments kept occurring throughout the evening, I had a growing conviction that I needed to find a way to get this important message out to more people.

So that’s why I said yes to another scary idea and made the video!

Obviously, the video isn’t an interactive dialogue like all my jelly bean conversations have been, but because this is such an important message, I’ve chosen this media to communicate more broadly than I could do in small groups or individual conversations.

November is Lung Cancer Awareness Month! Please honour me by setting aside ten minutes: seven minutes to watch the video and three minutes (or more!) to consider what your response will be.

There are many people who played various roles in helping, supporting and encouraging me along this whole jelly bean journey. Thank you! I am especially grateful for the technical support and encouragement of Jith Paul of Treepot Media. Thank you, Jith, for your partnership in the making of this video. I literally could not have done it without you! 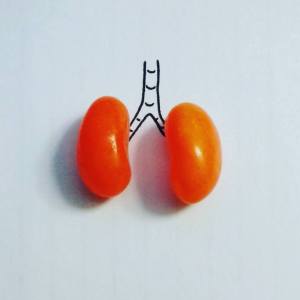 … is from Psalm 23, and especially meaningful to me as I go through my ever-changing lung cancer journey. I was diagnosed in December 2013, when my children were 6, 10 and 12. I’m so very thankful to be alive, and doing much better now than I was in early days. We thank God and lung cancer research, and our tremendous support community, including great care at our cancer centre.

These days much of my time is invested  in lung cancer advocacy, which is authentically reflected in this blog.

I began this blog when newly diagnosed and undergoing  chemotherapy. You can read about early days of chemotherapy if you are interested.

I started this blog with hope that it would help communicate with the loads of lovely, supportive people who care so much and gently ask for updates. We are so grateful for the amazing people who are surrounding us, helping us, praying for us, cheering us on and walking with us – whether from near or far.